This is the first in a series of interviews looking at the processes and journeys of creatives from a broad range of backgrounds. Here we speak with Vancouver based @mercurialmilk about the development of sketchbooks and their cathartic nature.

Can you talk about how you use a sketchbook? I know this might sound obvious, but the sketchbook is, I suspect, more than simply a set of pages. It is a contained element, often in chronological order, and it contains more than just drawings.

For me, a sketchbook is an artwork in two parts: the first is the art on the page and the second is the art of the sketchbook as a whole. Each journal spread has its own message, image, and theme but it’s always in the context of the whole book.

I am always considering how the pages flow from one to another and how it looks overall. Both aesthetically and thematically, they need to work together.

Weirdly enough, I don’t usually go in chronological order. I try to loosely go from beginning to end but I skip around all the time. The reason is pragmatic: I get attached to a certain type of imagery or medium and don’t want to repeat myself from page to page.

Another huge element for me is using text. It’s not really common to see text as part of an actual artwork – at least, in ‘high art’, it’s unusual. Most prefer to do artists statements to explain any necessary info about the work.

I’m the opposite, I love using text! It’s why I call them art journals instead of simply sketchbooks. It’s evolved over time – my early work was almost a diary-like jumble of personal thoughts, usually in really small print. I realized that due to the fact that I’m posting on social media, it can be really hard to read so I started to focus more on larger text with more impact.

Your sketchbooks are very personal, and often very revealing of how you are feeling, your anxieties, worries etc. How to you see this as it could be seen as a contradiction, with the sketchbook traditionally seen as something private, but now through social media a far more public document.

I think about this all the time. In fact, it buries itself into my artwork repeatedly. Am I changing the way I express myself to be more palatable for social media? Is what I’m feeling universal? Am I a burden on my audience?

I definitely think that I change how I say things and I self-censor myself a bit because my following has gotten to be quite large. The main concerns for me are privacy and security and it can be hard to reconcile that with artistic integrity.

One thing that has really helped is that no one from my ‘real’ life follows my account or knows about it. If someone does find it or follows me, I block them – including my family, co-workers and friends. Basically everyone except my sister, who is a special case.

I find that this way the reactions I’m getting for my art are genuine and real, instead of my friends and family following me out of obligation. It also allows me to be more honest because – lets face it – artists pull inspiration from the people that surround them all the time.

I need that divide to maintain honesty and it’s worked well so far. I find that I hold back a lot less than I do in real life.

Is the sketchbook for you a way of recording something you have already thought of, or is it a way of developing thoughts and work?

It’s definitely a development. I tend to let each page grow organically and rarely do I sit down knowing exactly how I want it to look. This is probably for the best because my art never looks like it does in my head, and if I got caught up with meeting my own expectations, I wouldn’t get any artwork done. I would choke.

I usually start with an image – I have a folder on my phone and computer where I collect images that catch my eye (it’s massive) and decide on composition first. How much space is this going to take up? Will I use each page of the sketchbook separately or both of them as a ‘spread’? After I’ve completed the imagery aspect I either look through my inspo folder for a quote/subject/prompt that would work well with the image or – if nothing comes up, I just leave it.

Sometimes it takes a few days but other times it can be months before I finally decide how to ‘complete’ a page. I let it happen without forcing it and I’m usually working in 3-4 sketchbooks at a time so I can hop over to something else for a while and maybe what I see in another sketchbook gives me ideas for the unfinished one.

Do you see the sketchbook in some way as being cathartic? You use the phrase “get the demons on the page and out of your head” can you elaborate on this?

Yes, it’s absolutely cathartic. I realized that after I left university and felt so defeated in my artistic ability that I stopped creating art almost entirely. I started knitting, which is another type of art, I suppose, but it wasn’t the same.

I was so miserable, struggling with my mental health and was in a really bad place. Discovering art journaling really saved my life. I know how cheesy it sounds! Creating something physical – a manifestation of my mind – kind of… separates it from me so I can see it from another angle and discover new ways of analyzing it.

Not to mention how much it helps the existential dread and nihilism. It’s hard to feel like nothing matters and existence is futile when you can create something beautiful.

Social media has allowed people, often from non-formal backgrounds to produce and share work. I personally like this democratisation but am keen to know your thoughts.

This is something I spoke about really in depth about a few weeks ago when doing a YouTube video on the merits of art school and my personal experience with it. I started making art in high school with an incredibly supportive teacher who took a ‘there are no rules in art’ approach. In the 11th grade, she nominated some of my work into a provincial art exhibit. They took work from high school kids all over the province and displayed them throughout the city for several months. Our class got to do a field trip to see all the artwork and I remember feeling so incredibly inspired by the work I saw there.

A year later, I got early acceptance into a very prestigious fine art school in BC and my mother and I decided to go to the grad show to see what kind of work I could potentially be creating in four years. I was so excited to see it… But when I got there, I was completely underwhelmed. I think a big reason for that was because art school adheres to the current art period – which is contemporary art – and contemporary art is very divisive. Personally, I am not a fan at all and I think that’s why I felt so disappointed. I ended up turning the offer down.

I took art courses (as electives) at the university I did end up going to and realized that I had made the right decision in turning down art school. Those courses taught me that I was never going to be good enough unless I started following the official rules. After I finished university, I stopped making art entirely. I felt completely demoralised and worthless.

It wasn’t until years later when I discovered the artist community on tumblr, and then Instagram that I had that euphoric feeling again – the same one I had in that high school exhibit where I was so inspired.

Anyone can post their work on social media and be instantly connected with a massive community of like minded people – many of which never went to art school and many of which create art for the sake of creation. It’s like when you watch kids finger painting – there’s a delightful freedom to it that I want to capture again. Back before we were taught to draw within the lines or learn the rules of what art is supposed to be.

I like how you called it a ‘democratization’ – I think that’s the perfect word for it. It allows for more options, more variations of art and I’m hoping it propels us into a new art period. 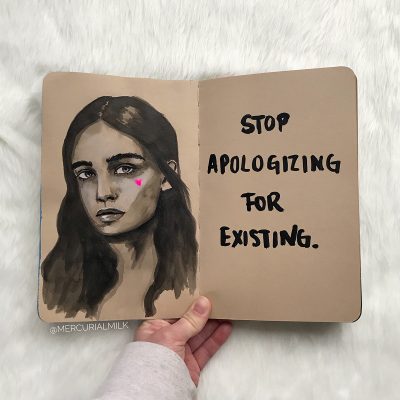 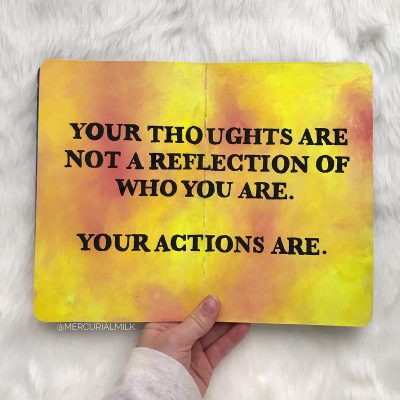 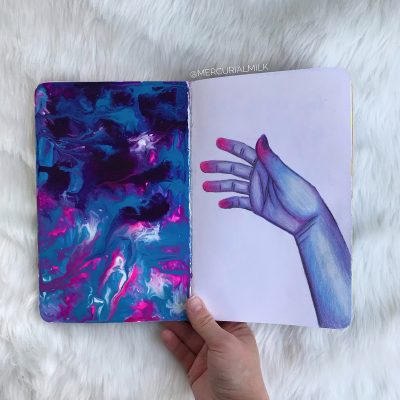 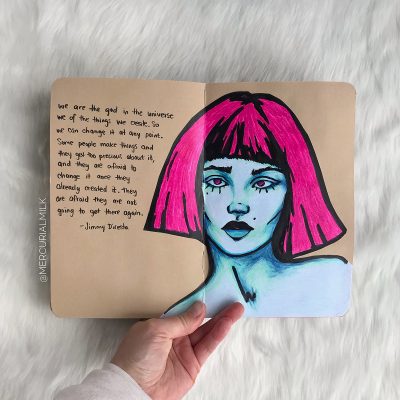 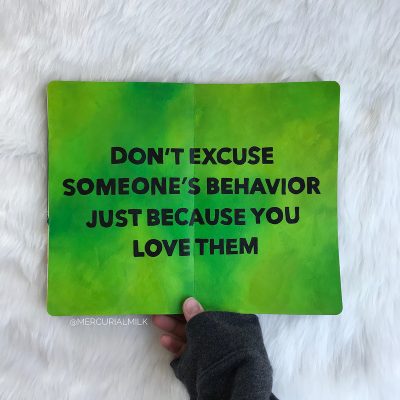 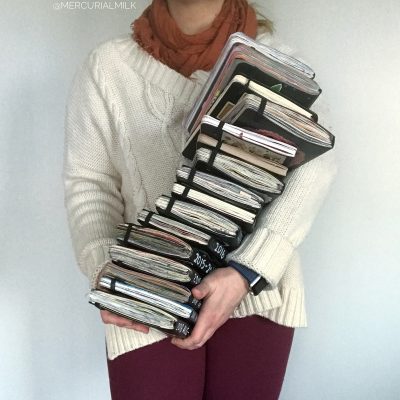 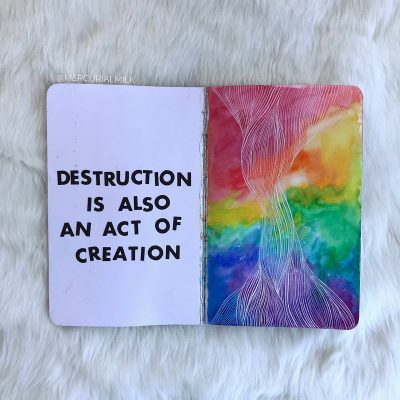 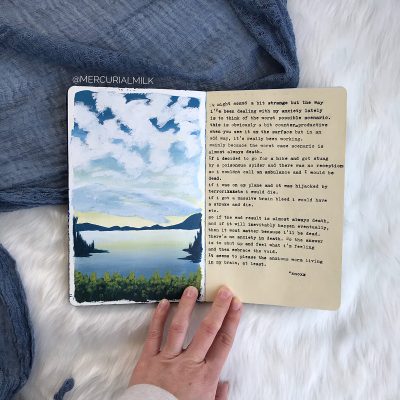 One thought on “Interview: @mercurialmilk”