Over the past year I’ve been working with George Hardie on a book edition he stated around 2001. It was originally due to be published in 2014 but this never happened. After I was given various ‘bits’ of the book from staff at the University of Brighton following George’s retirement in 2014. At his retirement show there was one complete copy of the book, an artist’s proof, from an edition of 99, with the main edition remaining incomplete.

The book features several items ‘tipped’ in, or attached to the main pages of the book, with surrounding pages cut out to accommodate the extra width of the objects. This process, I’ve been informed by Helen, my Book Arts Technician is called ‘guarding’, which really suits the process of protecting these inserted objects. Below is an example of the guarding process. A book, in an envelope, within the main  book, requires for pages to be cut out to allow enough space. If this wasn’t done, the book would expand and by the end of the production process be fanning out under the extra width. 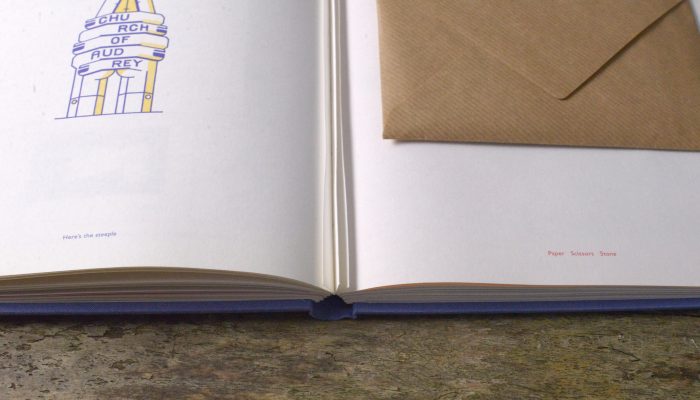 But to back track a bit, the very first items given to me were some ‘running sheets’ , the proofing papers used by printers when setting up a lithography press. Shown below are some of these flat printing sheets with pages from the book over printing one another in a seemingly random manner. These sheets are what sparked my initial interest in the book, and contacting George, firstly to see if he wanted them back or not, led to conversations over a potential book, and finally to the conclusion we should complete together the unfinished ‘Manual’ Edition. 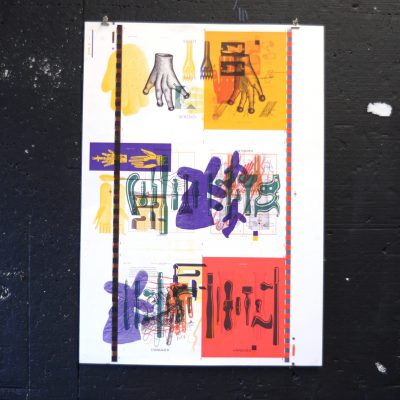 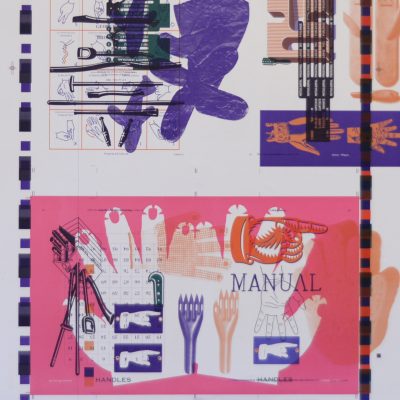 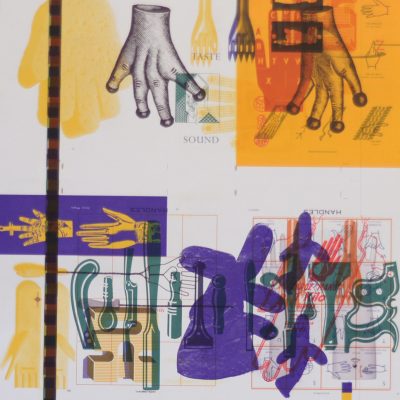 At around the same time as receiving these sheets, I started looking around the University for other items that might be associated with the book, and to my surprise I found lots more than I expected. Papers in plan chests, items in old cupboards and lots of hand based objects in book arts, letterpress and even the fantastically named ‘Heavy Metal’ room at the University of Brighton.

Within these objects I found the original self-portrait by George that later manifested as his ‘logo’ while at Nicholas Thirkell Associates (NTA). There is lots of interesting articles on this special time for design and illustration including this by Nicks ex colleague while at Carroll Dempsey Thirkell (CDT):

Below, left to right, original self portrait made using Rotring pens, black ink and Tippex. ‘Refined’ logo marque used at NTA. Screen print edition by myself and Chris Hunt, at the screen printing department of the University of Brighton.

Whilst producing this edition I have referenced ‘SHOP’, a book by George Hardie and Betty Miles with contributions by Richard Wentworth, Lois Walpole and David Blamey among others. It’ a fascinating book looking at batch production and the creation of small editions. I’ll be doing some writing about this over the coming weeks but wanted to share one of the opening lines from it as it sums up the liberation of self publishing. 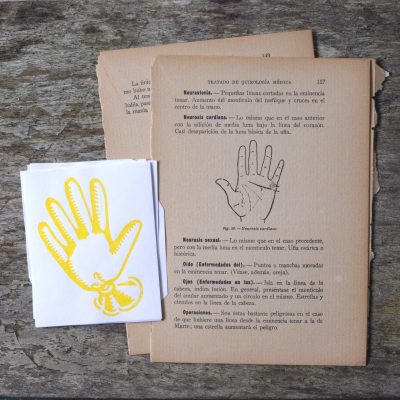 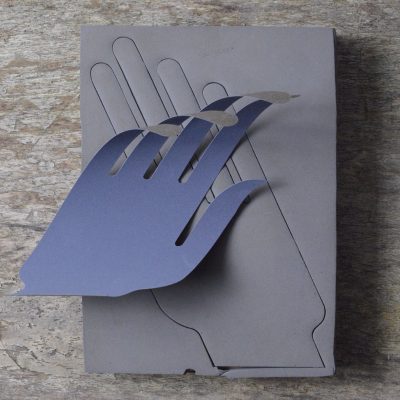 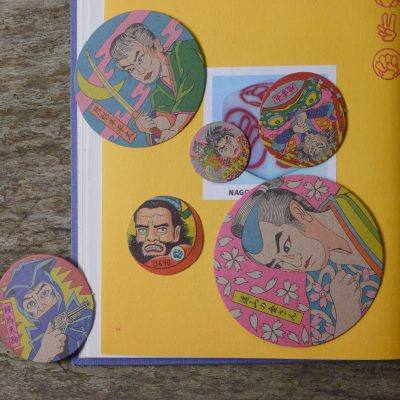 If so, why not write a comment or share it to your social media. Thanks in advance if you can help in this way.
Get the latest…
@unseensketchbooks