In conversation with Brussels based artist Lenny Mathé.

From an early age I rebelled against the school system. I didn’t follow a classic path. I would define myself as self-taught, always searching. I entered the artistic world at first via music. At the age of eleven I began to rap with my mates from school.Though I never signed a project in my own name, you can hear me sing on “Bisounours” from the Cocorosie second album and on a few records by other artists that I crossed paths with. I took some time to find my way and to understand the beneficial power that art could have in my life. My father was a painter and a sculptor. I think I didn’t dare enter on this path when I was young because his talent impressed me so. I only really gained in confidence after his death.

I wrote songs where I constantly laid myself bare. This creative process was very painful to me. I felt I always had my head below water. I was seething with more or less unwanted emotions and I had to find an outlet. I began to draw. Unlike writing, the page could stay white without me suffering. Then all kinds of coloured creatures started to spring from my imagination. It was a total discovery to find out that I was capable of concentration and patience. The sales I made in parisien underground exhibitions motivated me to continue.

Then came more or less productive periods up to the summer of 2019 when I had a kind of revelation. I decided to devote myself to what I really wanted to do. No more dead-end jobs. Since September 2019 I am entirely into the creative process and hoping to make it work “professionally”. It’s not easy and not always lucrative but creating brings me a really enjoyable feeling of freedom.

When I worked as a barman or a delivery man I felt empty and the days were all the same. Since I’ve broken out of the rut I was in, I feel in constant evolution. All the work that I produce turns each day into a different story. Devoting myself to what I really like and spreading it around gives a sense to my existence.

Your work uses simple colour palettes with images reduced often to silhouettes. What influences this? Where do you see your work sitting, within art or print making or a combination?

Art is a means of communicating. Keith Haring’s will to democratize art by making it accessible to everyone is inspiring to me. I use a simple, spontaneous and symbolic visual language with the same intentions. I go against the elitism that I feel so often encloses artistic expression. You find a variety of influences in each artist. It is tempting to compare. The universal symbols that I use can bring to mind those of Miro, Matisse or Basquiat. In some ways the absence of academic rules and filters in the latter’s work has been liberating for me. I probably share more than one free, even childish stroke, and the stars with renowned artists but everyone invites to travel and reflexion in his own way. You can convey emotions and ideas without having spent years studying a technique. This is doubtless what attracted me to rap. Rhythmics, a mike and words. No singing lessons, no musical theory, no music academy. The intention and the message above all.

By reducing the illustrations to the essentials (universal symbols) and by mainly using primary colours and solid colour as kids do spontaneously, I aim to communicate in the simplest of ways with the child within us all. I really like to create original art work yet a part of my work lends itself to printing. There are many craft technique processes that I want to explore that will maybe lead me to more multiple prints. I don’t want to limit myself to a sole medium. What counts for me, beyond the medium and the technique employed and the places where I could exhibit my work, is to succeed in imparting a positive message of sharing that can be recognised by a wide audience and not just those in spaces dedicated exclusively to art.

You often use typography in a playful way. “Fuck You / Love Me” for example. Do you think ideas through differently using text as opposed to imagery?

The fact that my first form of expression was the written word has definitely influenced the introduction of words in my paintings and drawings. It’s an echo of my past that is incorporated into my present in a transformed way. I have opted for a readable typography, both simple and graphic, like my figures. I use words in the same way as I use images or symbols to sustain the intrinsic meaning of the work. Some people are more receptive to words than images and the text can sometimes open a door that the image alone cannot. Texts and images interact, join up or clash sometimes as different parts of a drawing without text can do, always to sustain the message. They are there to enhance the point, matching up the poetry and the symbolism to create both visual and aural slogans. “Think the image and see the text”.

What is your working pattern like? How do you work?

My studio is at home. I usually work in the day. I need the sunlight and its’ energy to work while the vibrations of the moon incline me to reflection. Once the sun has set the search for ideas is on. I organise, categorise and synthesize them. I rarely make notes and generally speaking I don’t make tests or do sketches before the definitive form of the work.

The project takes shape in my mind so once the idea is well organised and the final work is visualised, I go straight to the creation. The news is often a trigger. A video, an article, an image that gets to me enough to inspire me. I don’t always know what I am going to create but there are recurrent themes that I care for: how human beings relate to nature; how we don’t always seem to understand that we are a part of it; the destruction of the planet; inequalities / injustices, the cosmos and the quantum theory.

If I don’t have a precise plan, I choose a support like a piece of paper with a nice grain or a road map. Each type of support influences the final work and the tools I use: acrylics, gouaches or crayons. I observe. I let the information and the energy of the support come to me. I watch out for what it will reveal a bit like a sculptor in dialogue with the stone or the wood he’s about to carve. This can take a certain time. Whether the support takes on a well defined project or that an idea germinates from it, there is almost always a strong correlation between the place indicated on the map and the idea of the work.

The support and the idea are in alliance. For example “Keep the stars in the sky” was conceived on a map of Poland where the Auschwitz-Birkenau camp was. This gives a special luminous power to the star that the angel is carrying at arms’ length and that he is trying to put back in the sky. It’s a struggle against obscurity in which humanity sometimes gets lost.

In the same way “The volcano in my heart” was conceived on a map of the extinct volcanoes of the Auvergne. The yellow source of energy that springs from the figures’ chest evokes the love force within us that we sometimes don’t let out. “We live in a broken world / society” is a response to the massive demonstrations that shook up France in 2019. A figure is falling out of the sky with his heart on fire on a map of Paris that’s covered in the colour that’s now identified with the “yellow jackets”.

As much as the symbols or the colours chosen, the title is a piece of the puzzle. It’s an integral part of the whole. It’s born at the same time as the idea materialises but the exact words are revealed during the creation of the work. The title is a clue. It renders the poetry of a given moment, of an emotion, a bit like a Haïku. More a question than an answer, it invites the reader to find the echo within himself to these words. Without a title the work is unfinished. 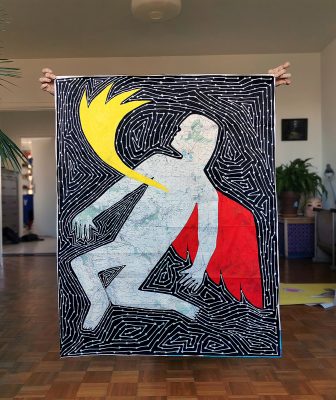 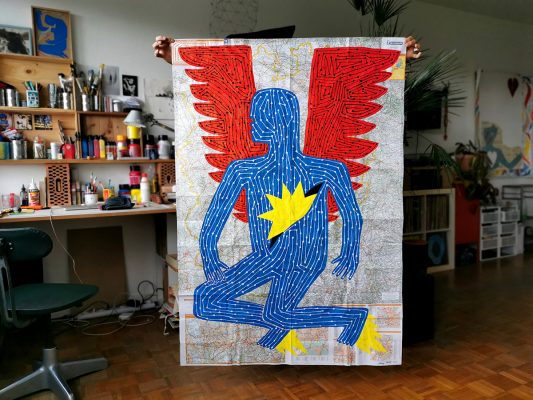 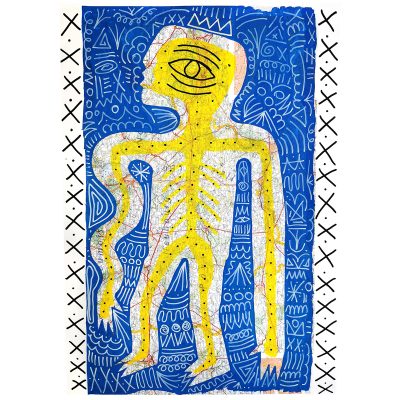 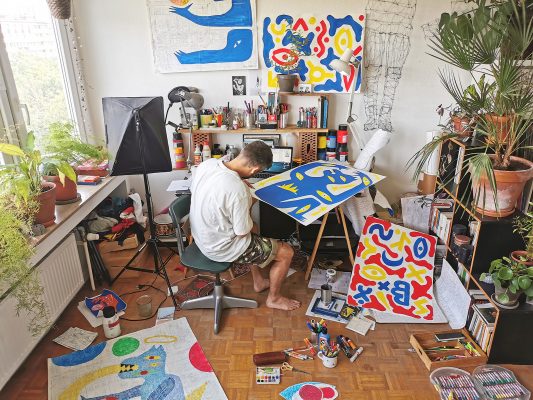 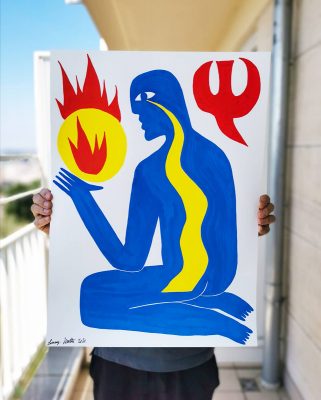 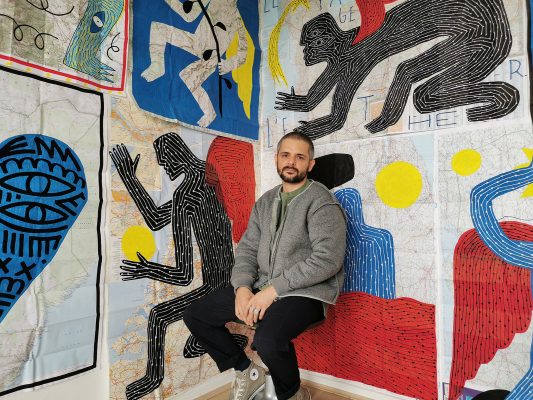